The Fall sports calendar is as loaded as an Idaho potato at a Vandals tailgate. College football and the NFL are back, the NBA and NHL begin their pre-season schedule, and MLB gears up for the playoffs. The biggest storyline we have seen so far might also be the fastest acting (pun pending). If you tuned into any college football game this season there is a good chance you saw Reggie Bush enjoying a Wendy’s breakfast sandwich during a commercial break. This example is one of many in the college and professional sports landscape. Quick Service Restaurants (QSR) have always been at the pinnacle of target marketing and most recently are catering their advertisements and promotions for college fanatics everywhere. To help push their messaging, Wendy’s became an official sponsor of NCAA college football and teamed up with the legendary running back, who also doubles as a college football host/analyst on Fox.

Quick Service Restaurants, traditionally known as fast-food, are staples around any college campus. QSRs continue to dominate outside of college sports, as common partners with professional teams and leagues. Citi Field where the New York Mets play boasts a Shake Shack behind center field. Dippin’ Dots can be found at over half of all Major League Baseball stadiums. Even esports is in on the QSR action, with Jack in the Box engaging in a multi-year partnership with esports powerhouse Envy Gaming and their franchised team brands as their main jersey sponsor.

Stadium food and QSRs bring out both nostalgic and comforting feelings, and their messaging aligns with their goals. When looking through KORE’s sponsorship industry data, specifically at QSR brands, they focus more on broadcasting assets and promotions, which almost perfectly aligns with Wendy’s most recent campaign. Looking at brands across all industries, we see Ticket & Hospitality assets included in about 70% of sponsorship deals. This is attributed to brands’ desire to be part of the team, treat their colleagues, and their employees. Strategies like these are especially true if a company has an office in the same metro area as a team. QSR brands on the other hand only include Tickets & Hospitality assets in about 34% of deals, which leads to the question, where are they spending money?

Now that we’re a little hungrier for data, let’s look at the menu below. We can tell simply from watching games that QSRs leverage big media buys to get their names and promotions in front of fans. Our data shows these two categories are included the most often in their deals, and often overlapping with each other in the same deals. A single sponsorship contract can include multiple types of assets based on the brands’ objective, which is why the “Item Popularity” column is over 100%. Let’s say we only looked at one deal and it included Broadcasting and Community assets; both of those categories would show 100% popularity. Click the sponsorship menu below to open it in a new window. 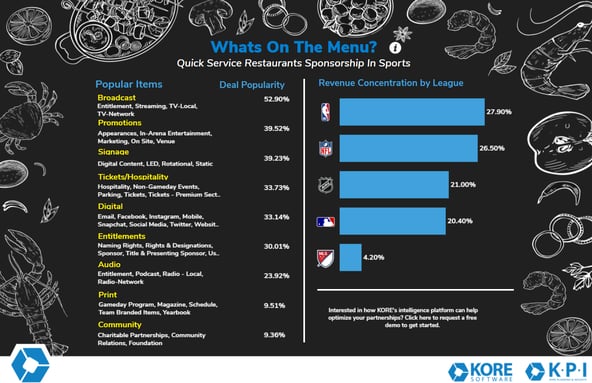 As we look through the sponsorship menu, we can see different examples of what these assets are. Signage, for example, is included in about 39% of QSR sponsorship deals, and includes LED boards around the stadium, or a physical sign in the outfield at a baseball game.

Since 2018, QSRs have nearly split their spend between the NBA and NFL, with opportunities to grow in other leagues. This does not account for individual athlete partnerships, as that data can start doubling up. When a Subway commercial featuring Steph Curry is shown during a college football game, both the broadcast and Curry would be considered properties that partner with the sandwich chain. We’ll be watching the focus on how QSRs continue their involvement in collegiate and professional sports, potentially with a breakfast sandwich in hand.

Interested in how KORE’s intelligence platform can help optimize your partnerships? Click here to request a free demo to get started.

Partner Collaboration Made Easy With the New Tableau Connection