Congratulations to the Atlanta Braves & Houston Astros on reaching the 2021 World Series! Both teams have a rich history and their respective fanbases have enough passion to provide an exciting atmosphere at both ballparks. These clubs are more connected than just meeting here in the Fall Classic. The manager of the Astros, Dusty Baker, made his debut as a player in 1968 with none other than the Atlanta Braves. The teams’ connections grow even stronger, as the manager of the Braves, Brian Snitker, will be coaching opposite his son, Troy Snitker, who is the Astros hitting coach. Their Thanksgiving dinner could be a little tense to say the least.

The Braves and Astros finished second and sixth respectively in both total and average attendance this year. There is no fair way to compare attendance in 2021 to past seasons, but we can start to appreciate how fans slowly returned to venues across the country.

The season was very transformative as the year went on; capacity restrictions were in place when the season started but varied by state, allowing stadiums to update their rules as they saw fit. Yankee Stadium, for example, hosted “social distancing” sections for un-vaccinated fans, while vaccinated patrons were able to get a sense of pre-pandemic normalcy during the first half of the season. As the country progressed through the pandemic, some ballparks did away with social distancing restrictions, opening the gates to sold out crowds. 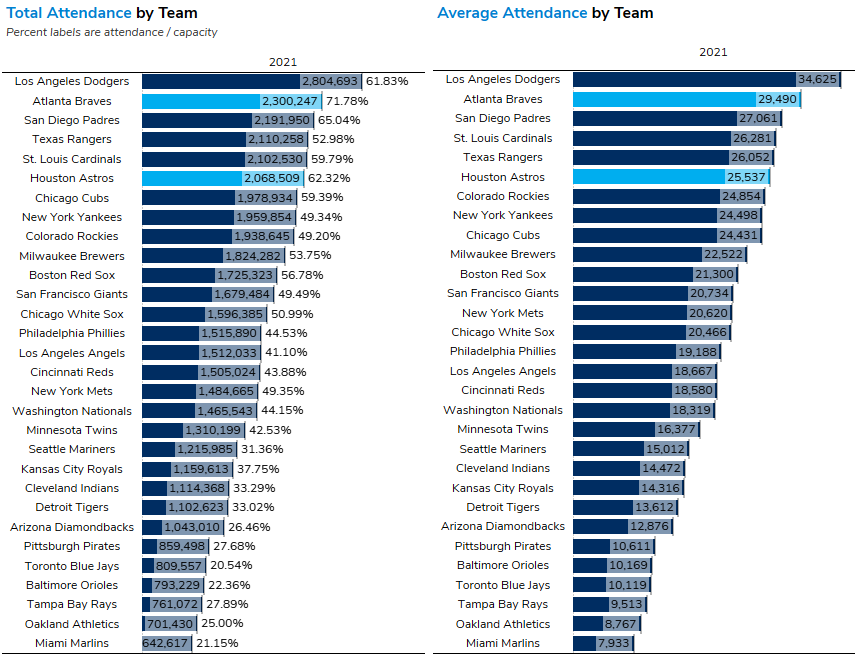 Check out our interactive dashboard here based on ESPN’s attendance data for MLB, NBA, NFL, and NHL since 2011.

ESPN maintains attendance data for all 30 ball clubs (and other major sports leagues) with records dating back to 2001. Throughout the 2021 regular season, the Los Angeles Dodgers welcomed the most fans with over 2.8 million total attendees. It is worth noting the Dodgers also have the largest capacity to leverage, with room for 56k, yet they still maintained an attendance rate of about 62% of capacity. The Atlanta Braves, who eliminated the Dodgers in dramatic fashion, maintained the highest percentage of attendance to capacity in 2021, filling nearly 72% of the stadium over this tumultuous year. This can likely be due to the Braves not only fielding a competitive team but also easing mask requirements (although still encouraged) as early as the second month of the season.

As great as ticket sales are, they are not the only factor that contributes to an organization’s success on and off the field. Other things to consider are market size, team performance, sponsorship effectiveness, community impact, and broadcast ratings.

Looking at both Braves & Astros stadiums, each holds between 40-42k fans, putting them both in the bottom half of MLB venues in terms of available capacity. Prior to 2017, the Atlanta Braves played in the iconic Turner Field in downtown Atlanta. As part of a relocation and redevelopment project in 2017, the Braves moved 10 miles northwest of downtown, still in Cobb County, in an area known as “The Battery.” The new stadium was promptly named SunTrust Park as part of a 25-year, $10 million naming rights deal. It wasn’t until 2019 that Truist Financial Corporation, previously known as Branch Banking and Trust Company, purchased SunTrust Banks, inheriting the naming rights deal. My heart goes out to the Stadium Operations staff for having to change out all those SunTrust signs for new Truist ones.

Although sponsorship deals on average are about four years long, the two World Series teams boast lengthy naming rights deals. Minute Maid and the Astros agreed on a 28 year deal worth over $100 million back in 2002. Coca-Cola might be the real winner by having a loyal Coca-Cola fanbase play against a Coke-owned branded stadium (Coca-Cola Co. owns Minute Maid and is based in Atlanta).

Last year we discussed how Nike took over the jersey rights of MLB and now display their iconic logo on the front of jerseys, breaking away from a traditional “clean” uniform baseball historically is so proud of. Based on sales from MLBShop.com since the 2021 Opening Day, the Braves had two players finish in the top 20 in jersey sales, Ronald Acuña Jr. (3rd) and Freddie Freeman (15th). The Astros landed one spot in the top 20 list, with Jose Altuve finishing 17th in jersey sales.

Major League Baseball has double the home games than the National Basketball Association and National Hockey League, and 10x as many than the National Football League. The 81 home games during a baseball season provide ample opportunities for brands to get in front of fans, factoring into the league’s sponsorship strategy. Leveraging KORE Software's industry-leading dataset, we notice that signage assets in the NBA and NHL make up between 30% - 36% of these league's sponsorship revenue. MLB on the other hand, generates nearly 43% of sponsorship revenue from signage assets. The significance of how much more MLB relies on their stadium and broadcast visibility significantly impacts their sponsorship strategies.

When it comes to playoffs, MLB league-level sponsors take precedence. We often see a lot of T-Mobile and Taco Bell commercials during playoffs. This year we were introduced to Good Sam (RV rental and outdoor tourism company) as the Presenting Sponsor of MLB Playoffs. Good Sam can leverage the MLB logo on their website, proving this relationship intends to be more of a partnership to engage with each other’s audiences rather than a straight sponsorship.

In terms of quantity of deals, MLB tends to include some combination of signage, tickets/hospitality, and promotional assets in over half of all deals. Between 2018 – 2021, the number of deals that included tickets & hospitality assets in their deals is nearly 62%. Some examples of assets in this category include tickets in premium sections, parking exposure (or free parking), and access to non-gameday events. Hospitality areas in stadiums are popular destinations for corporate partners to treat their employees to a fun night or to entertain clients, or both. With Coca-Cola’s exposure at both venues, I’m willing to go out on a limb here to say Coca-Cola staff and partners will be present in hospitality areas in every World Series game.

This should be a very close World Series in terms of on-field competition. The Astros opened as a favorite with 57% probability of winning (-135 Money Line), but the Braves are riding a very emotional, authoritative revenge tour from last year’s abrupt ending (the Braves lost to the Dodgers in the National League Championship Series in 7 games). The relationships, sponsorship, and attendance similarities between these two teams make for a competitive yet even matchup, both on and off the field. Best of luck to both teams and we are looking forward to an exciting and historic World Series.

Interested in how KORE’s intelligence platform can help optimize your partnerships? Click here to request a free demo to get started.

0 Comments
Partner Collaboration Made Easy With the New Tableau Connection